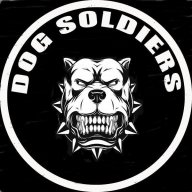 We hope this messages finds you and your's healthy.
We are now recruiting for all platforms.

We were established in 2007 on the foundation of competitive spirit, mutual respect, and camaraderie. The DSC has been a respected and rapidly growing clan. It is the goal of this organization to continue its expansion while maintaining its elite reputation in the online gaming community. Our General tells us that the origin of the DOG SOLDIERS is Cheyenne, but was shared with many other tribes. No one knows just when the term "DOG SOLDIER" CAME ABOUT. I guess they where always there. They were the protectors of the people, and at times acted as the police. In times of war, was the last line of defense. They were chosen for their bravery in battle, their willingness to fight, and die for the people. They were known for their devotion in keeping the people free, and their brutality in a fight. Not all people agreed with the "DOGS" or their tactics. But no one opposed then publicly and walked away unscathed. They were fierce, strong honorable and a little crazy. And this is the model our clan is based on.