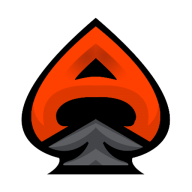 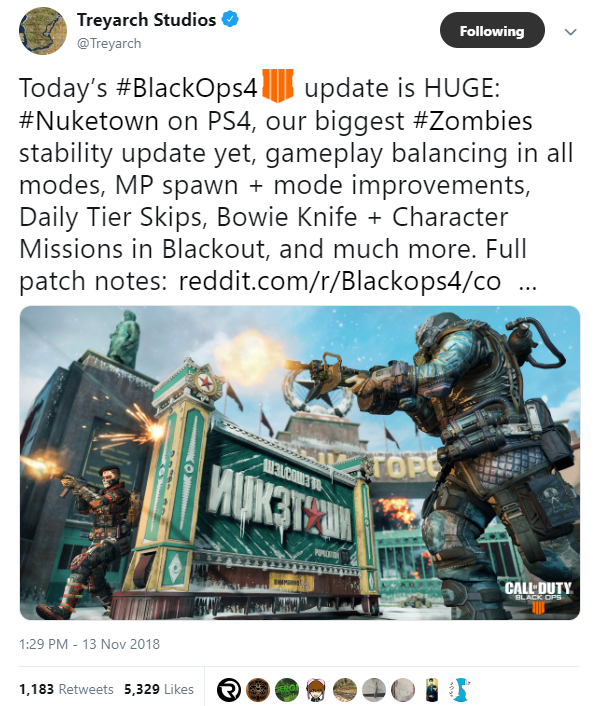 Our November 13 game update is absolutely huge, delivering Black Ops 4’s distinctive revival of Nuketown on PS4, our biggest stability update yet in Zombies, gameplay balance changes across all modes, map spawn and game mode improvements in Multiplayer, the Bowie Knife and new Character Missions in Blackout, the launch of Daily Tier Skips, and much more.

First up: Nuketown has arrived! One of our most popular maps of all time makes its reimagined debut in Black Ops 4, complete with its own unique surprises to discover. In true Treyarch tradition, we’re kicking off the Nuketown Featured Playlist this week on PS4 to celebrate. As a reminder, Nuketown is free for all Black Ops 4 players, launching today on PS4 and available on all platforms next week.

Today marks our biggest stability update to Zombies since launch. We’ve implemented 60+ fixes for crashes and other issues across all four maps with this update, covering everything from Easter Egg quest crashes and Max Ammo bugs to exploits in Classified and the return of Speed Cola functionality. The team has been hard at work to deliver an always-improving Zombies experience with today’s updates, and we continue to prioritize overall stability above all else.

We’ll be able to provide more concrete details on upcoming Zombies features in future community updates, including the Black Ops Authenticity Stamp system, Daily Callings, host migration support, splitscreen improvements, and more. We know there’s a ton of interest and anticipation about the road ahead for Zombies in Black Ops 4, and we’re excited to share more on what’s coming when we’re closer to debuting each new feature. For now, ensuring a fun, stable Zombies core experience for all players comes first.

We’ve made numerous gameplay balance updates to weapons across all modes, with several changes to gameplay specific to Multiplayer, including tweaks to the SG12 Strobe Light, SMGs, the Titan, and Cold Blooded. Some big changes have also been made to Ajax on the Specialist front, shortening the duration of his 9-Bang flash effect, reducing his accuracy when the Ballistic Shield is up, providing better counters to the 9-Bang and Ballistic Shield, and more. Check out the full patch notes below for every little detail.

Big news in Blackout: the Bowie Knife joins the arsenal and Zombies invade Nuketown Island on PS4, plus all players get access to the “Icons” Character Missions to unlock Mason, Woods, Menendez, and Reznov! The new Team Scoreboard has been added to Duos and Quads in this update, so you can check on how your squad is performing during the match. We’ve also made an update to allow weapons to now stream in faster at the start of each match to make sure everyone gets into the action once they hit the ground running.

We’re also happy to announce the launch of Daily Tier Skips in Multiplayer and Blackout for all players! Simply win a match in MP or earn a Merit in Blackout each day to redeem a daily Bonus Tier in the Black Market. This allows players to earn Contraband items even faster, and it’s a permanent addition to the game. Blackjack’s Shop is also now live on PS4 in the Black Market with new ways to customize your Multiplayer and Blackout experience, arriving on additional platforms next week. 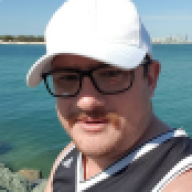 Nuketown is awesome. I still think they have to tweak each gun a little bit for everything to be fair. But they are getting better and better.