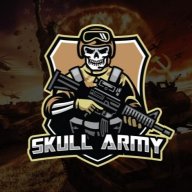 Our Community was Originally Founded February 18th 2020 from a group of outcasted gamers with a sole thought of running a community themselves, we are built on different types of gamers, the casual one and the competitive one. The real soldier wannabe and the actual real serving soldier. We have dedicated an anthem at the start of every meeting to honour Serving and Fallen Military Soldiers. With some members of world militaries in Membership.

We are a Military Structured Community and although we aren't strictly similar to the Military this is just so there is organisation in the rank structure so that everyone knows their place.

We are a Gaming Community dedicated to giving gamers a place to feel safe and respected and not to feel like an outcast. Skull Army was created to bring in gamers who feel other communities were power hungry and that they weren't feeling safe around anyone within them.

Join Skull Army, fight in online tournaments, play with other people, compete against other clans. This isn't what our community is mostly about because it's about the community itself being part of a team and not be all competitive focused.

Statistics don't matter here as many people have less K/D than most competitive players.

*Don't worry about try outs because when you join you are part of a community not a competitive focused clan with tryouts.*

Our Supported Games are Call of Duty, Battlefield, Rainbow 6, Apex Legends and much more!

WHAT IS IN IT FOR YOU?
-PROGRESSION THROUGH THE RANKS, BE ABLE TO LEAD OTHERS.
-STREAM TEAM (16+) [DEDICATED STREAM TEAM COLOR]
-MULTI-PLATFORM GAMING
-WEEKLY COMMUNITY MEETINGS
-DAILY THEMED GAME NIGHTS
-PRIZE BASED COMPETITIONS
-CALL OF DUTY REGIMENT [4RMY']
-LEARN IN-GAME MILITARY SIMULATIONS

Join Now and Become a Soldier.

Check out the Skull Army community on Discord - hang out with 198 other members and enjoy free voice and text chat.